Morning and welcome to Sunday morning

Morning readers,
What's on your agenda today then? I plan on ringing my pal, Dorothy and, if convenient with her, nipping round there for a coffee but I thought I would post this first ............

I do hope you aren't too bored with the ongoing vintage photofest I've been keeping you up to date on . . . .

More on the scrap book front yesterday too. 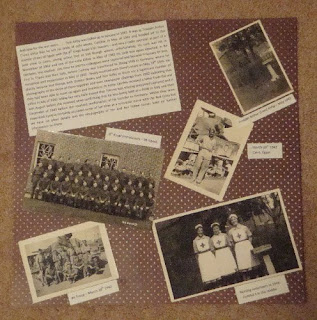 These were the photographs taken during war time, my Father-in-Law was a P.O.W. for three years and my M-i-L didn't know what had happened to him for several months so I certainly didn't want to make these pages all fluffy and pretty so it's basically just photos and journaling and the stories tell themselves. It was fantastic to have so much background detail as F-i-L had put little anecdotes on the reverse of many of the photos and there were letters, received by my M-i-L, from the war office too, and some newspaper articles from the early 90's detailing a reunion with my F-i-L and two of his comrades. It has certainly made fascinating reading as a slice of history though I imagine it was quite different to those directly involved. 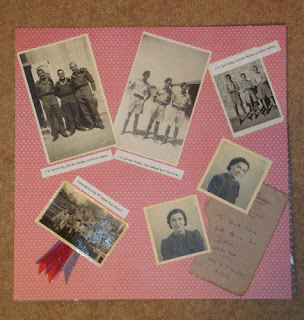 And yet, in many of the photographs F-i-L has a smile on his face which proves he managed to make light of his situation some of the time and probably that he wasn't too badly treated in the P.O.W. camps in Tripoli, Italy and Germany. As for my mother in law, she plainly decided to do something to help out the war effort in addition to working for Gloucester Aircraft Corporation and volunteered as a nurse - all in all, I think my hubby's quite rightly proud of his parents and I certainly wish I had known them back then too.
Have a great Sunday doing whatever you plan to do. Me? Hubby and I are off out this evening to meet up with friends and we're off to the Clifton Sausage so that'll be nice - never been there before, hope it's good. We're celebrating Graeme's birthday.
Posted by Kathyk at 09:00

crikey, you have been scrapping like a mad thing!! i must get around to doing more scrapbooking, got loads more photos. these old photos look great on that LO. X

Steve's dad would be 96 now and my own dad 87, your dad must have been ever so young to go to war, Jackid