Welcome to hump day Wednesday - sure comes round fast

Hi there,
Wednesday again, the first day of September and the first indications of autumn in the air; a little condensation in the car, a nip in the air and the biggest spiders in the house!!! Mind you, who can blame them if it's cold outside! My hubby HATES spiders and it usually falls to me to evict the wee beasties - which I'm happy to do unless they fight back!!! Anyway, the nights are drawing in so less time for photography but more time for crafting - I find.
What's going on this Wednesday? Well it's WOYWDW over on craftbubbles Cr 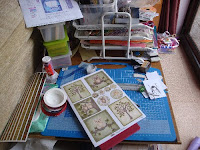 aft Mad and Loving It group - so here's what's on mine - not that it seems to change much week to week, it's not a big work desk you see so it is, literally, the project that's on the go that day. And today's project is to make something from the image, chipboard disc and length of thick twine sent to me by my trading card buddy Pam (on the Isle of Skye). The image btw is of a hedgehog on a swing - hmmmmmmmmmmmm. The eagle eyed amongst you might also see a sheet of A4 (top left) and this is the September challenge on Scrap Addicts over on Craft Bubble too - but that's okay - I have 30 days!
Also, I'm going to try to meet up with fellow bubbler, Lilian, at the Patchway (Bristol) craft club this evening, where she is secretary for this coming year - well done on being elected Lilian. It's a bit of a free form club from what I hear where you take your own projects to work on, rather than more of a structured topic evening - which means it appeals to more than one type of crafting, will let you know it works out. FYI Lilian's a stitcher of some note.
Those of you who know about my surrogate family will not be surprised to hear that hubby and surrogate SIL will be hedge and foliage trimming at REAL mum's later today - weather permitting. Forecast's good so fingers crossed.
And that would appear to be our day taken care of!! No crafting for me, AT ALL yesterday though I DID finally get round to doing the pillow box and gift bag templates promised to fellow crafters and those should go out in today's post. Long and the short of it is that I'm already feeling craft deprived!!!!
I was writing a letter to my Isle of Skye buddy earlier this morning and it came up about the population of the Isle of Skye (ask.com came up with around 9000) so then I set to looking at how many people live in my home town of Bristol and, here's today's interesting fact, there are over 416,000 of us - no wonder the traffic's so dire! We are, apparently, the U.K.s sixth largest city!! Wheww, there's a thing - see how many times you can drop that in to conversation today then!
Thanks for stopping by today, do feel free to leave a comment on the above, all of your comments are read and appreciated.
Posted by Kathyk at 08:31

We seem to be enjoying a return to summer down here....maybe it'll reach you soon!!

Wowzer. You've been a busy crafter today and no mistake. Great projects Kathy. If I had to pick a fave it would be the first one. What a great image. Is that a new one? I think you did a great job with your Hedgepig AND you used my fave dragon...awww...cute isn't he. Enjoy your craft club later. Look forward to hearing about it tomorrow. Lx

It's been another lovely day here weatherwise, totally manic for me otherwise!!! Glad you're not so craft deprived today :O)