How are you enjoying the new year so far?

I have to say that the weather has been decidedly dodgy of late and I shall be rust stained soon!!! Today I have not one but two funerals to attend so I'm kind of hoping the rain will let up long enough.

I have a question for you, dear readers ...... I started making a card from an idea for a collage panel which would deploy some NBUS (that's Never Before Used Stash to the uninitiated - thanks for coining that, Darnell) but I felt it needed something .... you know how these things can get away from you. My question is: WHICH VERSION DO YOU PREFER? No, honestly, I'd LOVE to know - I really like the one with all three on but I also really like the collage and sentiment only - I wonder if the version with all three elements on is too busy - hence my throwing the question out to canvas opinion ........

I hope you will leave me a comment numbering your favourite so that I can finish the card. In the meantime here's the materials list - it's a bit of a biggie .....
Materials used:
Collage and sentiment panels:
Additionally to the sentiment panel only
Masculine Image panel:

And now it's time to reveal the winner of the Friday Funny draw for 2013 ..... I used a random number generator ...... I've NEVER yet managed to work out how to insert the "evidence" on-line cleanly ... I ended up photographing this one hence the grid lines. Ah well, at least you know I did! Number four is Pat G and I will be packing up a little giftie some time very soon 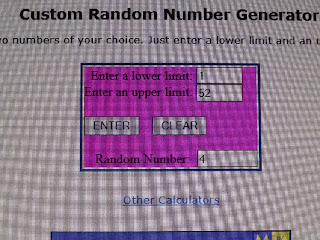 My wife, Jacs, had been after me for several weeks to paint the seat on our toilet. Finally, I got around to doing it while she was out. After finishing, I left to take care of another matter before she returned.
She came in and undressed to take a shower. Before getting in the shower, she sat on the toilet. As she tried to stand up, she realised that the not-quite-dry clear epoxy paint had glued her to the toilet seat.
About that time, I got home and realised her predicament.
We both pushed and pulled without any success whatsoever.
Finally, in desperation, I undid the toilet seat bolts.

Jan wrapped a sheet around herself and I drove her to the hospital emergency room.
The ER Doctor got her into a position where he could study how to free her (Try to get a mental picture of this.).
Jan tried to lighten the embarrassment of it all by saying,
"Well, Doctor, I'll bet you've never seen anything like this before."

The Doctor replied, "Actually, I've seen lots of them...... I just never saw one mounted and framed before!!!!"


Anyone who saw the "Mrs Browns Boys" New Years Eve Special will relate to this funny methinks!!! Poor Dino! I'll leave you all with that image in your head ...... Happy Friday

HNY to you hun. I will keep my fingers crossed that the rain holds off for you today (we have rather a lot here at the moment). Love the joke too. As for the card option, hmmmmm, on balance I think Option 2 is my fave. Hugs xx

Morning Kathy . .. well, if I HADN'T seen the middle card I would've said the top card was fine. But I think (by a smidge) I prefer the middle one.

Well, you DID ask!

It's the middle one for me too Kathy. Giggled at today's funny, though I'd hate it if it happened to me.

I agree with Sarn. The middle one is the best!

I love all cards. They all give different feel. My fav is the first. If use sentiment (like on second) I guess it can be turn a bit.. no straight.. Just my opinion )))
Happy New Year Kathy!!!
Hugs,
Natali

The middle card as well Kathy, It looks complete,

my fave is the first - great ff. Hope the day went ok x

These are fab card ideas Kathy...I think I prefer the 2nd one :)
The funny is brilliant too! :)
Thanks for joining us at Sketch Saturday this week and happy new year! :)
Lizy xx

Definitely the middle card for me and funny FF.
Have a great weekend.
hugs {brenda} x0x