Welcome to another Friday and they wouldn't be the same without the Friday Funny now .... would they?

How's your week been?

I've had a pretty sociable week really, with friends dropping in on their way north, arranged to visit pals in Blackpool in the not too distant future, met up with another pal for a restaurant dinner and another came to ours for her birthday dinner and today? I'm off with my pal, Liz, and cousin, Debra, for a girlie weekend away - leaving our respective husbands on guard duty and catering for themselves - easy peasy on that front since mine does 99% of the cooking in our house anyway. I hope to share some pix on my return so watch out for some potentially photo heavy posts early next week then! We're going to Evesham and Broadway, a pretty part of the world. Whilst I used to travel regularly to the outskirts of Evesham I'm not sure I've ever been to the centre and I know I've never been to Broadway before so this will be a new experience for me. I just have to hope that the party hubby COULD be having in my absence won't be too raucous! .... or messy!!!!! So, as you can see, a busy old week at the purple palace - it's going to need a bit of a spring clean when I get back!! ESPECIALLY if that party goes ahead!

Before I go though, I have a couple of challenge cards to share with you all:-

The current challenge over at TIME OUT is: "Summer with the optional twist of flowers" and there's a CAS sketch challenge over at CAS Colours and Sketches ..... I hope my design fits the CAS feel as I've used tonal inks for my images, such as they are 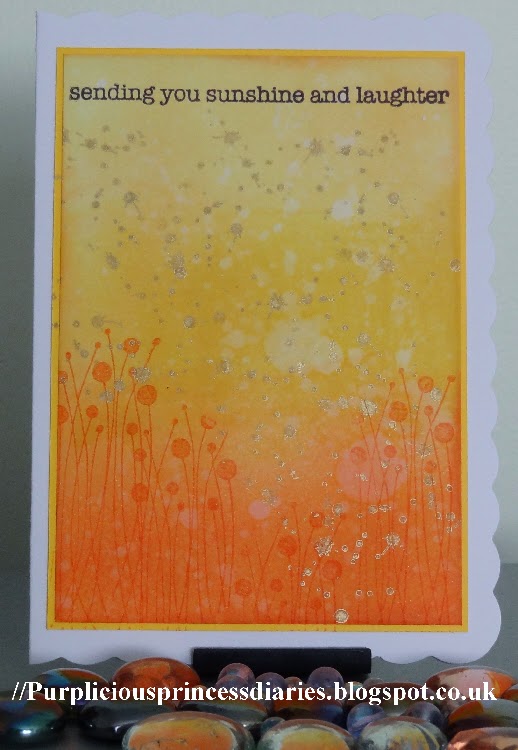 Want to see the sketch I used? I went with the "ombre" technique for my make 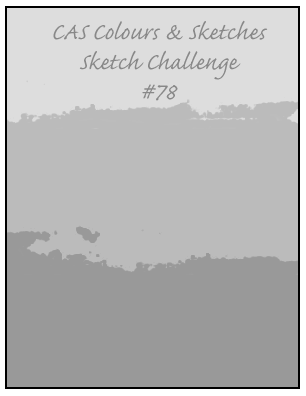 And here's another challenge card I ran up yesterday too:- 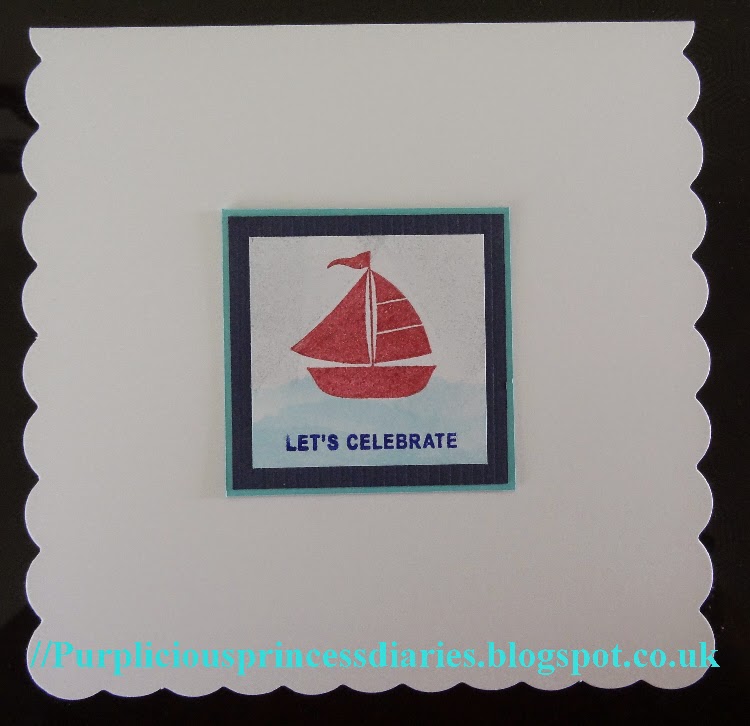 It's Clean And Simple and has a nautical theme so I'm sure it won't come as any surprise to hear that I plan to enter it for challenge #99 over at Addicted to Stamps where their challenge is: "CAS" and also over at The Card Concept where challenge #12 is: "A nautical theme".

Two pretty different cards I think you will feel, I like to mix it up .... and it still proves how wide the CAS spectrum can be - white space doesn't necessarily have to be - well, WHITE!
And now for the Friday Funny, this week it comes courtesy of Jacky - thanks matey, you're in the draw
Gotta love a company with a sense of humour ....
Kulula is a low-cost South African airline that doesn't take itself too seriously.
Check out their new planes!  And get a kick out of the comments at the end of the photos.


WHAT A PITY KULULA DOESN'T FLY INTERNATIONALLY -  WE SHOULD SUPPORT THEM IF ONLY FOR THEIR HUMOUR - SO TYPICALLY SOUTH AFRICAN.

Kulula Airlines’ head office is situated in Johannesburg.  Kulula Airline attendants make an effort to make the in-flight "safety lecture" and announcements a bit more entertaining.  Here are some real examples that have been heard or reported:

On a Kulula flight (there is no assigned seating; you just sit where you want), passengers were apparently having a hard time choosing, when a flight attendant announced: "People, people, we're not picking out furniture here, find a seat and get in it!"
---o0o---

On another flight with a very "senior" flight attendant crew, the pilot said: "Ladies and gentlemen, we've reached cruising altitude and will be turning down the cabin lights.  This is for your comfort and to enhance the appearance of your flight attendants."
----o0o---

On landing, the stewardess said: "Please be sure to take all of your belongings.  If you're going to leave anything, please make sure it's something we'd like to have."
----o0o---

"Thank you for flying Kulula.  We hope you enjoyed giving us the business as much as we enjoyed taking you for a ride."
---o0o---

As the plane landed and was coming to a stop at Durban Airport, a lone voice came over the loudspeaker: "Whoa, big fella. WHOA!"
---o0o--

After a particularly rough landing during thunderstorms in the Karoo, a flight attendant on a flight announced: "Please take care when opening the overhead compartments because, after a landing like that, sure as hell everything has shifted."
---o0o---

From a Kulula employee:
"Welcome aboard Kulula 271 to Port Elizabeth.  To operate your seat belt, insert the metal tab into the buckle, and pull tight.  It works just like every other seat belt; and, if you don't know how to operate one, you probably shouldn't be out in public unsupervised."
---o0o---

"In the event of a sudden loss of cabin pressure, masks will descend from the ceiling.  Stop screaming, grab the mask, and pull it over your face.  If you have a small child traveling with you, secure your mask before assisting with theirs.  If you are traveling with more than one small child, pick your favorite."
---o0o---

"Weather at our destination is 50 degrees with some broken clouds, but we'll try to have them fixed before we arrive.  Thank you, and remember, nobody loves you, or your money, more than Kulula Airlines."
----o0o---

"Your seat cushions can be used for flotation; and in the event of an emergency water landing, please paddle to shore and take them with our compliments."
---o0o---

"As you exit the plane, make sure to gather all of your belongings.  Anything left behind will be distributed evenly among the flight attendants.  Please do not leave children or spouses."
---o0o---

And from the pilot during his welcome message: "Kulula Airlines is pleased to announce that we have some of the best flight attendants in the industry. Unfortunately, none of them are on this flight!"
---o0o—

Another flight attendant's comment on a less than perfect landing: "We ask you to please remain seated as Captain Kangaroo bounces us to the terminal."
---o0o—

Part of a flight attendant's arrival announcement: "We'd like to thank you folks for flying with us today.  And, the next time you get the insane urge to go blasting through the skies in a pressurized metal tube, we hope you'll think of Kulula Airways."
---o0o—

Heard on a Kulula flight: "Ladies and gentlemen, if you wish to smoke, the smoking section on this airplane is on the wing.  If you can light 'em, you can smoke 'em."
Don't forget, if you enjoyed this Friday Funny you might like to nip across to Hettiecraft's blog to share hers too - but please leave me a comment as I love to see what you all think of my FF's!

To my regular readers, there won't be a post from me tomorrow as I'm away and I just know my husband is not going to post on my behalf and I suspect hell would freeze over before he would be likely to make any cards for my Saturday challenges ...... I MIGHT get to post on Sunday but it's more likely that I won't be on-line till Monday - see y'all then!

And, it's my pal Jenny's birthday on Sunday so I'd like to wish her a very 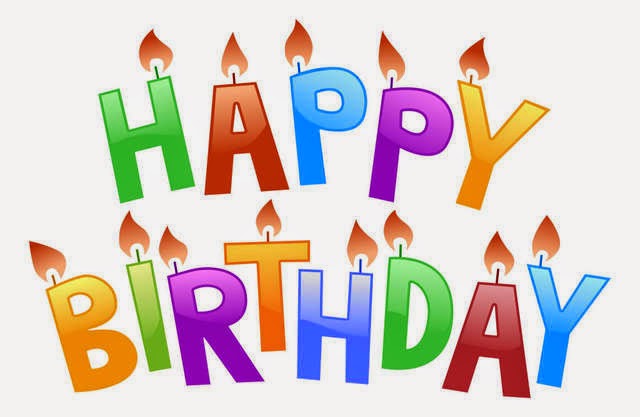 Have a fabulous Friday and a fun weekend

LOVING those CAS cards . . .so different but both excellent. The ombre technique one is my fave. Great splatting too!

LOL - FABULOUS Friday Funny Kathy. It had me in stitches. LOVE those planes (though I did love the British Airways Panda plane too...)

Two smashing cards. The boat one is my particular favourite proving once again that less is, most definitely MORE (sometimes ;oD)

Have a smashing weekend away with the girls. Looking forward to pics already.

Love your summery cards....to match the final arrival of summer.
Have a great weekend.

A great way to use our sketch this week at CC&S - thanks for joining in. Loved reading your funny post too! - Jacqueline xx

You made me smile today with this fun post! I absolutely love this tale on our challenge at TIME OUT, what wonderful background, just perfect. So pleased you shared this with is at TIME OUT x

Yum - love that ombre card and the cas one is spiffy too! loving that airline and those cabin crew! x

This is such a fabulous masculine card! I love how clean and simple you've kept it and I just love your little boat! Thanks for joining us at The Card Concept!

Love the FF, Not sure i would like to travel with them. Could be fun though.
Hope you had a great time away,
Hugs
lilian

Love the FF, Not sure i would like to travel with them. Could be fun though.
Hope you had a great time away,
Hugs
lilian

Beautiful delicate flowers on the first card! Your second one is super CAS! Thank you for taking the TIME OUT and join us, Gerrina

Thanks for playing along with us at CAS Colours & Sketches! Love your take on the sketch - the gradient background is gorgeous!

Great cards Kathy. have a fab time with your friends. Love the Friday Funny this week too
x catherine

Aw, if only all the peeps in the world could have fully developed senses of humor, what a better place it would be!!

Your cards are different and still both excellent, Kathy! I love your perfect take on all the challenges! Your meadow is so warm and rich in those colors and your little red sailboat set in an ocean of white scalloped waves is sensational!!

I'm sure you are having a BLAST right about now! I wish I could be there!! Hugs, Darnell

Two great cards! I love the blending you did on the first card and the scallop border on your second card are so much fun! Thanks for playing along with us at ATSM. :)

Lovely cards there Kathy. I have seen that plane before but very funny. I would love to fly on it one day!
Hope you had a good weekend and there is not too much cleaning needed!
Hugs
xx

Love your first card Kathy and my goodness how refreshing to have a company with humour!
Love it!
Chrissie

Now that's an airline I would love to fly. Nice job on your cards. Love the scalloped edges.

Kathy, that Friday Funny is just brilliant! I especially loved the one about the gas mask and picking your favourite child!
Lovely cards too...The orange one is so striking! :)
Lizy xx