The weekend starts here! and WHAT a weekend I have planned!

Got a fairly full on weekend planned, starting this afternoon ... I've two crafting pals coming for the weekend, we'll craft this afternoon/evening and all day tomorrow. I've a few projects ready for them and I've no doubt whatsoever that they will be bringing art journals with them. My camera is charged so I expect there WILL be photos although I may not get too much chance to share with you today ..... but I hope you will stop by again over the weekend and see how we're getting on.

I also have some rather nice news (IMHO) to share with you tomorrow, but I have some nice news which I can share with you today. A pal pointed out to me that I was one of the June winners over at the Stampotique challenge blog (for their June challenge) for this card, so, thanks for the heads up, Catherine!, I fired off my e-mail right away!, thanks so much peeps.

HOWEVER, before I get on with setting up for the weekend, I have to share a project with you .... honestly I went to my table of craftiness with every intention of cracking on with a ten card commission project but allowed myself to get sidetracked! ...... and may I say just how easily it happened too! A dear friend gave me a tissue box holder some time ago and, after some considerable while, I got round to decorating it and was reasonably happy with it ... at the time. Lately though, I've been looking at it and wondering .... so, I whipped the lid off of my gesso and before you could say David Coverdale it had gone from this 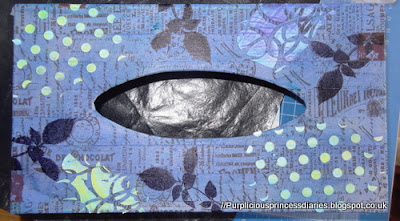 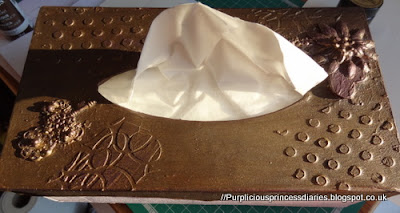 
I'll be entering this for the following challenges:-

And now for this week's Friday Funny, brought to you this week, courtesy of Marsha - thanks mate!

I was working in my front yard yesterday when I was startled by a car that veered off the roadway, clipped the tree on the lawn and ended up in the bushes at the side of house.  Luckily it missed me by a couple of feet.

I rushed over to see if the driver was OK and discovered it was an elderly lady (older than me, it appeared), who could hardly see over the dashboard.  I helped her out, and I sat her down on a lawn chair.

She seemed to be unhurt, just a bit shaken, but otherwise fine.  I said to her that she appeared to be rather old to be still driving a car.

"Well, yes, I am," she replied proudly.  "I'll be 97 next month (way older than me!)”  I told her I was surprised that she still had a driver's license, and  she said she was now old enough that she didn’t need one any more.

"No I don’t,” she said proudly.  “The last time I went to my doctor he examined my eyes and asked if I had a driver's license.  I told him yes and showed it to him.  He got a pair of scissors, cut the license into pieces, and threw them in the waste basket, saying, 'You won't need this anymore,' so I thanked him and left!" 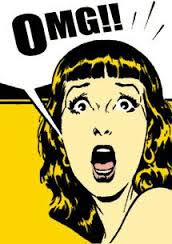 Have a great weekend - I know I WILL

The tissue box looks great kathy,
The FF really is a good, Really made me laugh.

Ooh love the reincarnation of your tissue box holder.

Chuckled at the FF.

Enjoy the crafty weekend....am hoping for a BBQ myself.
Great funny.

wow what a clever idea very impressive. Thankyou for joining in with our 'embossing' challenge over at Polkadoodles this fortnight. http://polkadoodle.blogspot.co.uk/2015/07/week-27-add-some-embossing-crafting.html

So cute box, thank you for joining us over on the Creative Moments Challenge blog. Good Luck!!! Agnieszka DT

Loved the FF made me smile out loud ha ha

What a splendid transformation of your tissue box, looks awesome in gold matey.

Great work on the tissue box, thanks for sharing with us at Polkadoodles Use Some Embossing challenge this week.
Jenny x
Polkadoodles DT

This is amazing. Thanks for visiting our Embossing Challenge
Penny (Polkadoodles DT)