Morning and welcome to another of those lazy Sunday mornings

Here we are, another Sunday morning and, with all the activity of the week, I'm hoping we're due a day off - from the decorating .. yeah, like THAT'S gonna happen - these walls won't paper themselves!.

Got up yesterday with a WICKED bad back and was on the fabulous cocktail one part paracetymol and two parts ibuprofen!!! Sadly, stayed with me until bedtime .. just hoping it will magically have disappeared by this morning. Sadly, NOT the case, still as bad as yesterday - I feel a trip to see my physio may be on the cards! Whoop de doo!

Still, as you might expect - you can't keep a keen crafter away from her Table of Craftiness so, I have a couple of things to share with you. I recently stumbled across a sketch which inspired my imagination. Now, knowing that the new issue of Craft Stamper was going to have the fabulous INKognito flower stamp (in miniature) did NOT help me as I wanted to make the card THEN> Wouldn't you know, no sooner was the Mark I finished than the postie arrived with the Craft Stamper...... 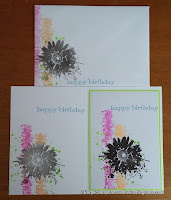 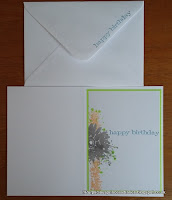 The front/back and insert of my card, and front and back of my envelope 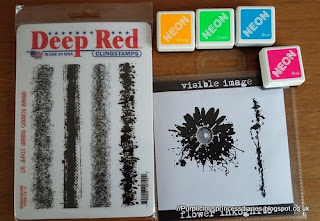 Armed with the mini version I set to - to see if I was right about the scale .... see what you think ... 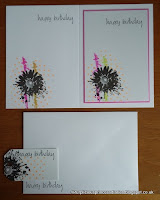 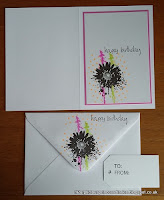 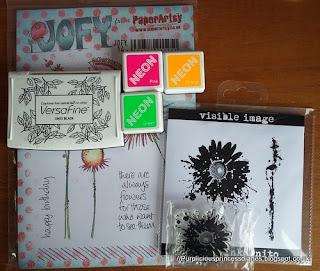 Whilst I really like the first card I do think the proportions work better on the second and I'll be entering this for the following challenges:- 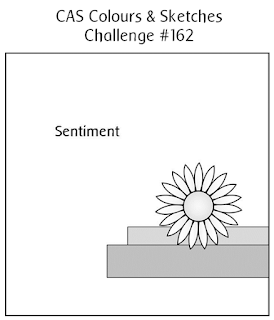 Woo Hoo! Found out last evening that I won over at the Twofers challenge blog . . . for my entry for their numbers challenge (#13), thanks so much peeps ... and I won with the card below. The prize? An awesome $20 gift certificate from AlleyStamps ... I've e-mailed them, just waiting to hear how to redeem my prize! YAY! Already spent that amount (and more) in my head!

Hope you are enjoying your weekend. Woken up with a WICKED bad back this morning - foresee physio in my near future!

As regular readers will know it is my habit to make a Clean And Simple card each Saturday and usually for the Simply Less Is More though it often fits more than one challenge. Want to see this weeks make? 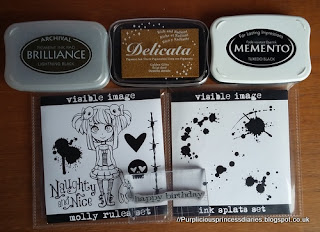 I'll be entering this for the following challenges:-

Have a good weekend

It's that time of the week again - time for the Friday Funny, that is!

Had a good week? Hope you've achieved a lot.

We've been decorating .... well, if I'm honest, hubby's been doing the ACTUAL decorating and I've tried to keep him supplied with tea! I even foolishly (and I hope my regular readers are sitting down at this point) OFFERED TO COOK!!! I know ... all I can say in my defence is that I must have been sickening for something ..... I offered to make a corned beef casserole!! WITH DUMPLINGS too - might as well be hung for a sheep as a lamb, eh?!?!?! You will be pleased (as well as a little surprised) to hear it was very tasty and the dumplings were fine though a little dry - last time I use a packet mix! And, we're both still alive - always a good sign!

So, of course .... in between SLAVING over a kitchen knife and a hot stove .... I've managed to fill my time with some reading and some crafting in amongst the mundane chores of my everyday existence!!! Here's my latest piece, it uses a flourish stamp I bought in Chicago a number of years ago and which I think has only seen ink once previously - yee haa! It's ALMOST NBUS! (Never Before Used Stash - thanks to Darnell for coining that phrase) 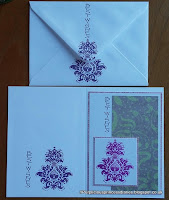 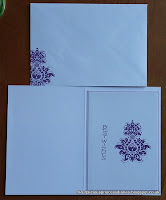 I'll be entering the above card for the following challenges:

And now for this week's Friday Funny which, once again, is coming at you courtesy of my pal SandraT, thanks mate! It also came in from Marsha so although SandraT got there first and gets the entry, Marsha will get a bonus entry as she sent the graphic!! People of a nervous disposition should LOOK AWAY NOW!!!

I am a Seenager. (Senior teenager) 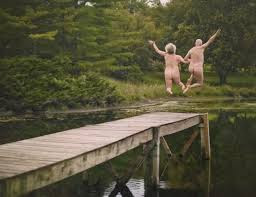 I have everything that I wanted as a teenager, only 60 years later.
I don't have to go to school or work.
I get an allowance every month.
I have my own pad.
I don't have a curfew.
I have a driver's license and my own car.

I have ID that gets me into bars and the wine store.  I like the wine store best.
The people I hang around with aren’t scared of anything.
They have been blessed to live this long so why be scared
And I don't have acne.

Also, you will feel much more intelligent after reading this if you are a Seenager:
Brains of older people are slow because they know so much. People do not decline mentally with age, it just takes them longer to recall facts because they have more information in their brains. Scientists believe this also makes you hard of hearing as it puts pressure on your inner ear.

Much like a computer struggles as the hard drive gets full, so too, do humans take longer to access information when their brains are full.

Researchers say this slowing down process is not the same as cognitive decline.  The human brain works slower in old age, said Dr. Michael Ramscar, but only because we have stored more information over time.  The brains of older people do not get weak.  On the contrary, they simply know more.

Also, older people often go to another room to get something and when they get there, they stand there wondering what they came for.  It is NOT a memory problem, it is nature's way of making older people do more exercise.

Have a great weekend

Just a quick post from me today - to let you know that it's Rudolph Day over at Maureen's blog - Scraps of Life, I've been lucky enough to snag a (temporary) slot on her Design Team and have three outings, each two months apart.

And the back of the card and envelope.The front of the envelope and inside of the card 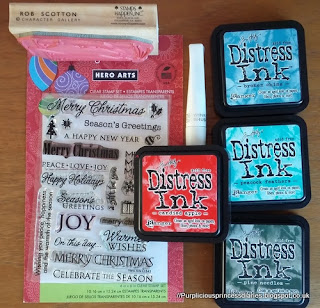 I will, however, be entering this make for the following challenges:-

Been enjoying watching Leandra Franich at the NEC trade show on periscope  this past few days ... never even heard of it a week ago and, once I decided to sign up, I found it quite tricky ... still can't work out how to "share" broadcast links .... I can copy the URL but have yet to work out how to share/paste - anyone?

However, I DID crack on with some crafting rather than get bent out of shape wrestling with the knotty problem above. I can't share all the details yet but here's a sneaky peek at a project I've been working on .................... 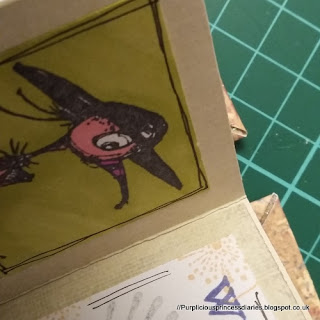 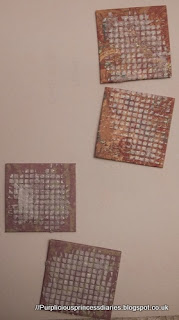 And now, since it is WOYWDW here's a peek at my desk 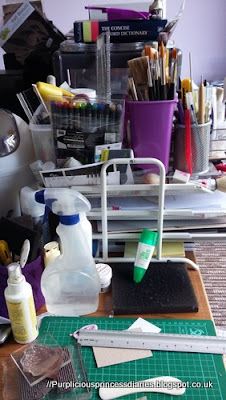 I'll be entering this for WOYWW this week .. in all its messy glory!

In case you are wondering about the brevity of my post .... all I'll say in my defence is ... STILL decorating!!!

I know, I know, I don't normally post on Tuesday's but, as you can see by the photos in this post, I had a bitty but creative day yesterday .. when I should PROBABLY have been assisting my hubby with the decorating but, honestly? He thinks I'm more of a hindrance so I have to keep him supplied with tea instead! Works for me!

Want to see what I got up to instead?


Materials used:
Not familiar with glass bead glitter gel? Check this out ....... gorgeous!


And I'll be entering this for the following challenges:-
Additionally, I found I wasn't done when I'd finished so .. 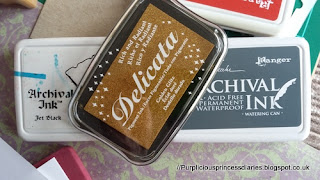 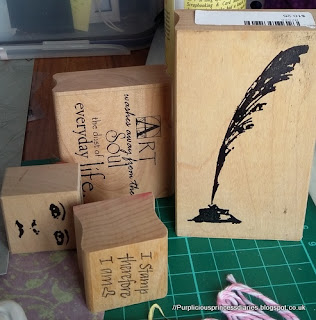 Welcome to a not so lazy Sunday!

A bit late from me today but we were decorating yesterday and, other than my LIM entry first thing yesterday morning I didn't get to my ToC (Table of Craftiness) all day! The decorating is coming along slowly but surely ... having moved all the furniture either out of the room entirely or away from the walls it has certainly revealed how long overdue it IS for decorating!

However, since the weather outside is frightful (sounds like a cue for a song) there was little else to do other than craft so ....  I have been busy beavering away all morning and this little batch of ATC's is what I've come up with ...


ADDITIONALLY, FOR THE HOLDERS:


So you see, they were only little pieces of art but lots of work and materials went in to the making of them! To that end I'll be entering the above for the following challenges:-

And here's how they looked as Works In Progress 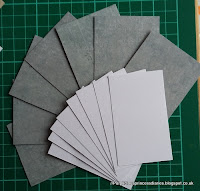 Snippets assembled
And the little cases 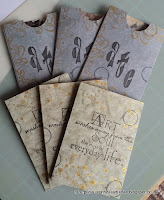 And some of my materials... 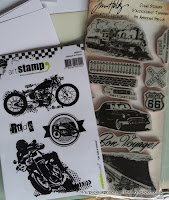 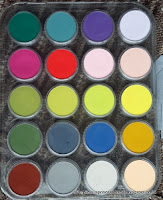 The Carabelle and Stampers Anonymous images and pan pastels