Morning - are you ready for some nostalgia?

Hmmm - spent much of yesterday going through a whole bunch of old photos . . . 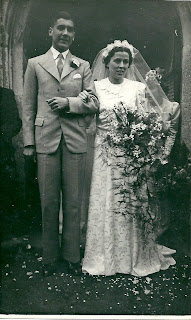 and white photo was of hubby's parents on their wedding day in April 1941 - they were both prominent sports personalities in Gloucester; his dad for football and his mum for hockey.

Then we found the more modern photograph, taken in 1991, at their 50th wedding anniversary party, with my hubby and I on the right - OMG - what a difference 20 years makes!!! M 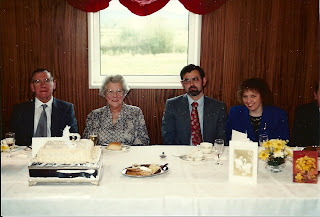 y hubby had black hair and I had really curly hair AND I was much thinner!!

Hmm - it's nice to rummage through photos sometimes and remember "stuff". 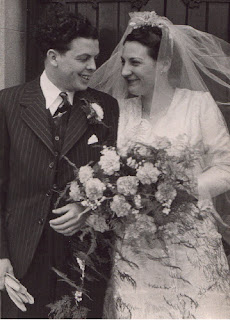 So, then I looked out the photograph of my own parents wedding in March of 1950!!!

What handsome couples they both made.

It's so nice to have a record of these two occasions and I am so pleased to have been able to scan these photos so we have them preserved forever - I feel a scrap book layout coming on . . .
Posted by Kathyk at 08:00

Oh Kathy, what beautiful pictures to treasure. They are both lovely but I adore the photo of your Mum and Dad and how they are looking into each others eyes. I can't wait to see your layout.
Katie x

What beautiful pictures Kathy. Thanks so much for sharing. They most certainly are two very handsome couples. Your mum and dad look so sweet smiling conspiratorially at each other. What a lovely piccie that is. Hope we get to have 50th wedding anniversary pics, don't you? Lx

Beautiful photographs Kathy, I am not surprised you treasure them.
GeorgieX

Not quite so sure about my bubblehead though - I loved it at the time, I'm sure!

They are going to make a wonderful page....treasures indeed.

Beautiful photographs Kathy and such wonderful memories - you are doing a grand job of preserving them for the future. Can't wait to see the scrapbook when it's done :O)

BTW - I think you rather fetching with your curls!!

These are really beautiful Kathy, I love photos too but now with the digital ones I am ending up leaving them on the computer!

Luv the candyfloss look!! couldn't imagine that style now. hehe!!
I hope you have finished the scrapbook pages now, ha!! They will look fabulous as always.....
Looking at old photo's is always nostalgic. glad you had a good time.
Luv Cath xxxxx